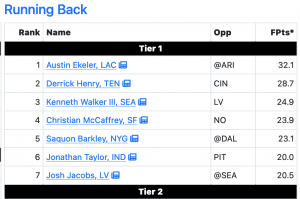 This is a post to discuss Week 12 fantasy football rankings. I will update this throughout the week as the rankings are posted and changed, typically from Wednesday through Sunday morning. Plus, feel free to ask your own fantasy football questions in the comments. Waivers, free agent add/drops, trades (although I am not a big […] 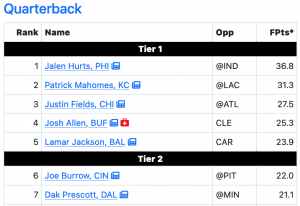 This is a post to discuss Week 11 fantasy football rankings. I will update this throughout the week as the rankings are posted and changed, typically from Wednesday through Sunday morning. Plus, feel free to ask your own fantasy football questions in the comments. Waivers, free agent add/drops, trades (although I am not a big […] 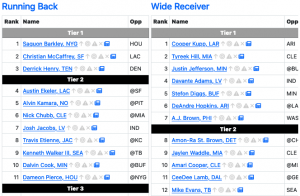 This is a post to discuss Week 10 fantasy football rankings. I will update this throughout the week as the rankings are posted and changed, typically from Wednesday through Sunday morning. Plus, feel free to ask your own fantasy football questions in the comments. Waivers, free agent add/drops, trades (although I am not a big […] 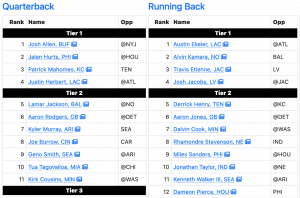 We are at about the halfway point of the NFL season, and past halfway of the fantasy football regular season, but it is time to try something new. This is a post to discuss Week 9 fantasy football rankings. I will update this throughout the week as the rankings are posted and changed, typically from […]

Justin Fields A "Long Shot" To Play Against Jets

Ja'Marr Chase Officially Out On Sunday

Gus Edwards Expected To Suit Up In Week 12

Chicago Bears quarterback Justin Fields (shoulder) is considered a "long shot" to play against the Jets. However, he will go through pregame warmups before a final decision is made. After a dreadful start to the 2022-23 campaign, Fields has emerged to become one of the best fantasy quarterbacks going. Unfortunately, with the Bears unlikely to make the playoffs, there's a chance the signal-caller won't be back this season to avoid further damage. In any event, Trevor Siemian is expected to be under center in Week 12. Yet, fantasy managers shouldn't expect much out of him versus a potent Jets defense.

Cincinnati Bengals wide receiver Ja'Marr Chase (hip, shoulder) won't play on Sunday against the Titans. The wideout had been riding a questionable tag heading into Week 12 after missing time because of a hairline fracture in his hip and a torn labrum. However, Chase isn't ready to return, although the team remains hopeful he will be available for the Week 13 meeting the Chiefs. In the meantime, Tyler Boyd and Tee Higgins should remain Joe Burrow's preferred targets in Week 12. With Joe Mixon (concussion) out as well, Samaje Perine, who is coming off a three-touchdown effort versus the Steelers, could also be more involved on the receiving end.

Baltimore Ravens running back Gus Edwards (hamstring, knee) is expected to return in Week 12 following a two-game absence, according to NFL.com's Ian Rapoport. Edwards has been active for two contests this season, rushing 27 times for 131 yards. While Kenyan Drake and Justice Hill should get involved Sunday, expect Edwards to operate as the lead back while ranking as an RB3 in fantasy football.

San Francisco 49ers wide receiver Deebo Samuel (hamstring) is expected to play against the New Orleans Saints on Sunday, according to ESPN.com's Adam Schefter. He had been listed as questionable. The 26-year-old continues to be a major threat in the passing and running game. Thus, despite playing in an offense with a plethora of mouths to feed, Samuel should be started in all fantasy leagues.

Baltimore Ravens wide receivers Demarcus Robinson (hip) and Devin Duvernay (hamstring) are expected to be active for Sunday's game against the Jacksonville Jaguars, according to NFL.com's Ian Rapoport. Robinson has emerged as Baltimore's No. 1 receiver, catching 16 passes for 204 yards over his last three games. He ranks as a WR4 in fantasy football this week. Meanwhile, Duvernay has underperformed, catching just nine passes for 95 yards over his last five contests. He offers some upside in the special teams department but should still be benched in most fantasy leagues.

The San Francisco Giants had a chance to give their free-agent pitch to outfielder Aaron Judge the last two days, and MLB.com's Jon Paul Morosi expects the Giants to make a formal offer to Judge within the week. Judge and his agent had dinner with president/CEO Larry Baer, president of baseball operations Farhan Zaidi, manager Gabe Kapler and other members of the organization on Monday and continued to meet with the team on Tuesday. Morosi could see Judge signing with a team in the next two weeks by the end of the Winter Meetings. The 2022 American League MVP broke the AL home run record with 62 home runs for the New York Yankees last season and will be cashing in on the open market this winter, whether it be with the Yankees, Giants or another team. And wherever he lands, Judge will remain an elite power bat in fantasy.

The Los Angeles Angeles acquired outfielder Hunter Renfroe from the Milwaukee Brewers Tuesday in exchange for pitchers Janson Junk, Elvis Peguero, and Adam Seminaris. The 30-year-old will likely slot into an everyday outfield role with Mike Trout and Taylor Ward while providing power to the Angels' lineup. Renfroe slashed .255/.315/.492 with 29 home runs and 72 RBI in 522 plate appearances with the Brewers in 2022. From a fantasy perspective, this move theoretically puts Renfroe in a worse lineup, but the Angels have shown that they are willing to make improvements this off-season. A clearer picture of Renfroe's potential value will emerge once rosters become more complete.

Philadelphia Phillies outfielder Bryce Harper (elbow) underwent Tommy John surgery on Wednesday, and the procedure went "very well," according to a person with knowledge of the situation. Harper could be back hitting competitively in mid-May. The Phillies official Twitter account reports that the prognosis is for Harper to return as the designated hitter by the All-Star break in 2023, with a possible return to play right field towards the end of the regular season. The 30-year-old All-Star will miss the start of the regular season next year after playing through a UCL injury to his right arm for most of the 2022 campaign. He still hit well despite the injury, batting .286/.364/.514 with an .877 OPS, 18 homers, 65 RBI, 63 run scored and 11 stolen bases in 370 at-bats, so fantasy managers shouldn't expect much of a drop-off, if any, when he returns.